Upscale retail shops, a bustling food scene, and a collection of posh neighborhoods have earned the Catalina Foothills a reputation as one of the best places to live in the Tucson area.

Referred to by some as the ‘Beverly Hills of Tucson,’ the Catalina Foothills also provide easy access to some of the region’s best hiking trails, picnic areas, and national parks.

1. DeGrazia Gallery in the Sun

In the 1950s, Arizona artist, Ettore ‘Ted’ DeGarzia, began a small construction project in the Catalina Foothills. Over time, the project expanded to a 10-acre museum. The sprawling grounds feature a single-story building made of entirely natural materials from the surrounding desert. DeGrazia’s workshop, his former home, a tranquil chapel, and DeGrazia’s grave are also located on the grounds.

With a summit of 9,159 feet, Mount Lemmon is the highest point in the Santa Catalina Mountains. It is named after Sara Lemmon, the first woman to reach the mountain’s peak in 1881. During the winter, Mount Lemmon is a favorite destination for Arizona ski enthusiasts. During the summer, its 150-miles of well-marked trails make it beloved for picnicking and hiking. This is particularly true mid-summer summer when the high elevation offers a relief from the triple-digit temperatures in town.

Operated by the University of Arizona, Mt. Lemmon SkyCenter is considered one of the best star-gazing destination in the region. The research observatory is home to the largest public-viewing telescope in the Southwest. It offers a nightly stargazing program (weather permitting). 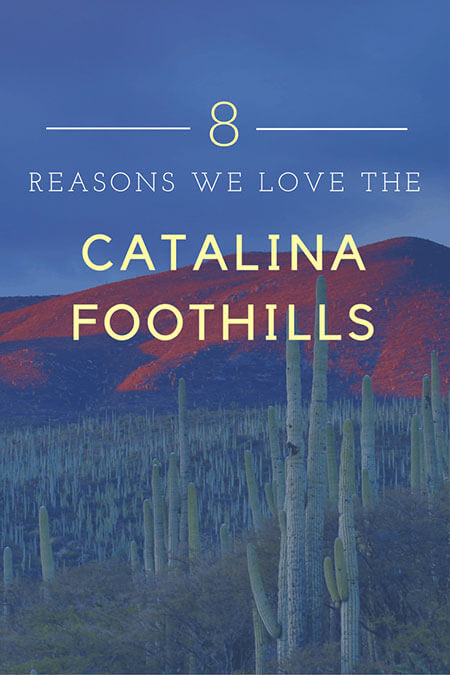 Located in the Coronado National Forest, Sabino Canyon features a plethora of picnic areas, waterfalls, streams, and swimming holes. Cars are not allowed on the premise, but a 45-minute tram ride allows you to explore the grounds, hoping on and off at nine different stops. There are numerous hiking trails, plenty of shade, and variety of wildlife.

Home to seven golf courses, the Catalina Foothills offer some of the best 18-hole courses in Arizona. You could play a different course every day of the week!

In the United States, the average commute time is nearly 26 minutes. In many of the major cities that time jumps to 90 minutes or more. For Catalina Foothills residents, commuting averages just 16 minutes!

Since 2014, the Catalina Foothills has been recognized for its blossoming food scene. Creative chefs have continued to expand traditional fare, introducing globally inspired menus and creative takes on old classics.

Do you already live? With so many good things to do and with it being such a good area why no consider a remodel. Some about location, you can always change your house but your change is location

Each year, U.S. News & World Report evaluates data on more than 21,500 public high schools to identify which schools are best at preparing students for college and careers. And each year, multiple Tucson schools are ranked among the best in the country – including Catalina Foothills High School.

Explore the other areas we serve in and around Tucson.

6 Things We Love About the Sam Hughes Neighborhood

How Remodeling Can Help You to Beat the Tucson Housing Market

Tucson Housing Shortage: How to Make Your Home Your Own